The Amazon is not picturesque in the post-card sense of the word. It is too powerful and disheveled to be tamed into a crisp, tight, oversaturated shot. Mother Nature still rules and her restless, fertile forward momentum can be seen everywhere. The Amazon Basin is larger than Western Europe and Peru’s piece of it is said to contain the greatest biodiversity of any place on earth.

Before I arrived, the pink river dolphins, sloths, and monkeys tugged at my imagination

but when I sat still in the jungle it was the birds and insects that struck me as wondrous and new: husky, stubbled-bodied tarantulas waiting in webs; the purposeful industry of the leaf cutter ants; the silent childlike dance of iridescent Blue Morpho butterflies glowing in the sunshine; and the constant textured soundtrack of birds and crickets.

We landed in Iquitos, Peru, at the end of October, almost a year to the day from when I impulsively signed up for a yoga retreat at the Tree House Lodge led by my friend Erika. The decision came on the heels of an intense month of too many hours at work and houseful of cranky teenagers. I was hooked by the thought of being off the grid. I figured I could always back out. I let the trip lay dormant in my mind, not truly committing, until six months later when the June cancellation deadline loomed. I had to either buy a plane ticket or wimp out. I bought the ticket.

There were fourteen of us, all but two from Austin. Iquitos is an isolated island in the Peruvian rainforest that can only be accessed by boat or plane. The airport is what you would imagine, small and questionably maintained, with the jungle encroaching from every direction. The air was heavy with smells yet to be named and the busyness of insistent baggage handlers and motocab drivers.

The lobby reminded me of my kids’ elementary school cafeteria filled with disoriented tourists ranging from Ayachasca seekers to elderly riverboat cruisers, along with returning locals greeted by waiting family members. All the new arrivals peeled off clothing as the grey chill of Lima was replaced with jungle humidity and heat. Late October begins the transition to spring and the rainy season.

We were met by Orlando, the lodge guide, and loaded into a van that looked like an old

school ice cream truck and began our two hour drive to the Port of Nauta. The colorful three-wheeled motocabs and scooters, piled with passengers, looked like battered antique tin toys and traveled in clusters. Once beyond the outskirts of the small city the traffic thinned but driving remained a creative expression with little concern for lanes or rules.

Although we were all united by our individual friendships with Erika, only a few people knew each other. I could feel the group’s center of gravity forming as we drove past concrete block and stilted thatched-roof houses, markets, and children in uniforms walking home from school. There’s no separating the vitality of the place from the bright green messiness of the jungle and where the land is not wild the soil looks scarred and depleted. 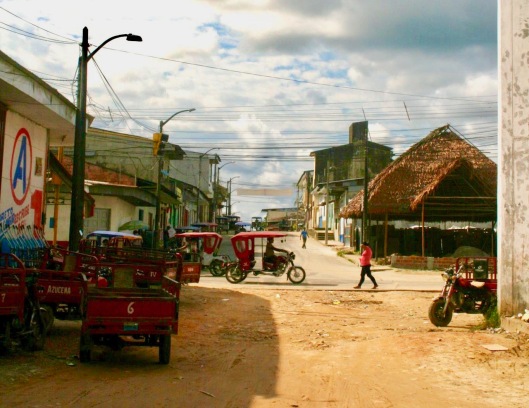 The Port of Nauta has an animated center of vibrantly painted concrete buildings
pressed to the river’s edge, with rust colored dirt streets, food vendors, shops and more motocabs. It was not until I walked out on the rickety dock and saw the Marañón River that I fully grasped how this region still belongs to nature even as corporate greed and poverty bare down on the Amazon Basin. The river looks at least a quarter mile across and has a sepia reddish brown monochrome like chocolate milk. 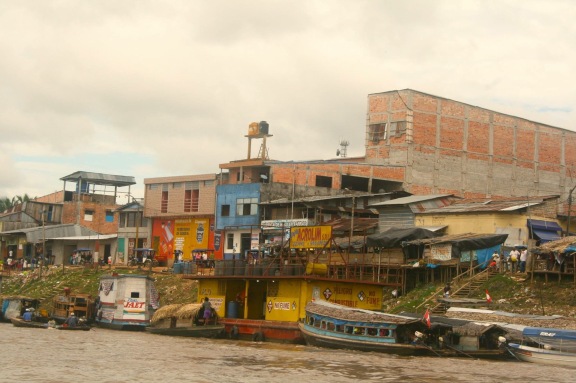 We walked down uneven wooden stairs that swayed as we stepped and boarded a narrow boat that looked like the body of a wingless commuter plane. My hand disappeared when I put it under the opaque water. We traveled for an hour down the Marañón, across the Amazon River, and up the Ucayali before connecting to the Yarapa and arriving at our final destination. 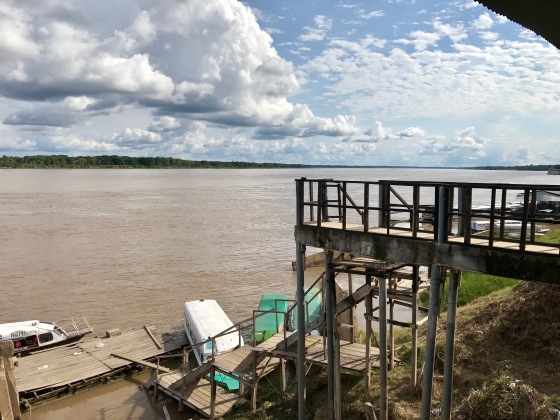 There are several small compounds for tourists along the tributary where we stayed but we rarely saw other travelers. The Treehouse Lodge is the only place where the rooms are actual treehouses connected by elevated walkways, stairs, and suspension bridges. The ten treehouses are encased in mosquito netting but open to the environment and the other-worldly cacophony of the jungle. Each has it own bathroom with a toilet, sink, and cold water shower. 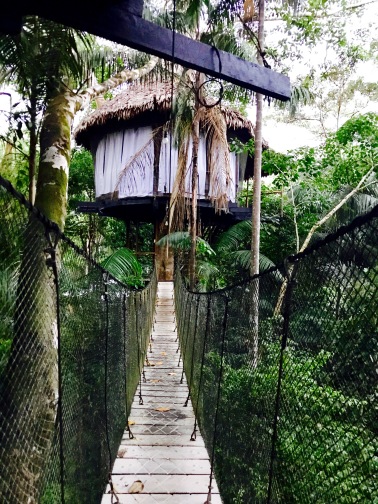 A round, two story stilted building serves as the common area where meals are served buffet style on the first floor and the second level is intended for gatherings with chairs, benches, and hammocks. The compound provides rustic comfort without compromising the remote jungle experience.  The lodge does not have wifi or cell phone service. The reprieve from my unacknowledged addiction to being connected made the space between my eyebrow soften.

Each day followed a similar schedule of gathering at six in the morning for yoga, meditation and writing with activities and downtime in the afternoon. We were paired with two guides, Marden and Orlando, who immediately became part of our group and enthusiastically shared their knowledge of the jungle. We fished for piranha, learned about medicinal plants, scouted for birds, animals and caiman, swam in the Amazon River, and on our last day visited a local village. There was a discipline to the days but nothing was mandatory and we had the freedom to participate how we wanted. 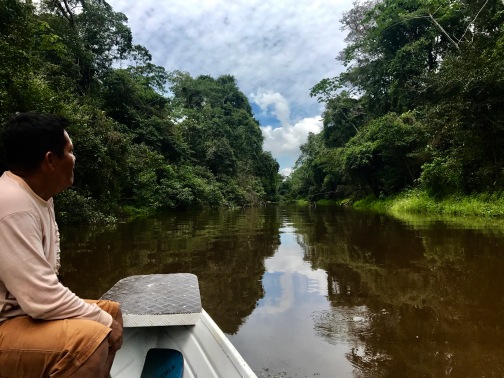 It’s against this backdrop that our group became a community, a camaraderie that changed me as much as the Amazon itself. We ranged in age from twenty to fifty-three with all decades in between represented. Whether we knew it initially or not, each of us arrived in the Amazon at some fork in the road with questions that needed time away from distractions to hear and feel the answers. 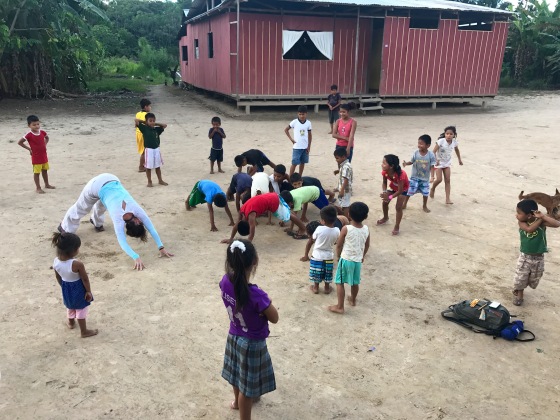 The jungle is a continuously changing collaboration of rivers, sky, vegetation, and creatures. Looking from above as I flew over, there was a redundant sameness, but once on the ground I realized that nothing stays the same in the Amazon. There is a natural, effortless cycle of renewal and growth. The environment was like fertilizer, an accelerant for our questions, that oddly made the passage of time feel slower and more intense.

Erika is one of those gigantically hearted people with the rare ability to share her story and beliefs while maintaining healthy boundaries. She set a tone for each day that encouraged rest and introspection, along with a lot of remedial play and laughter.

I was only in the Amazon for a week but it was the aliveness of the place and people that gave me back a sense of hope that I hadn’t even realized I had lost. The past can be a trap. I’ve been attached to a narrative that has resisted the future. The jungle reminded me that I have the tools, earned during fifty-three years of living, to move forward. 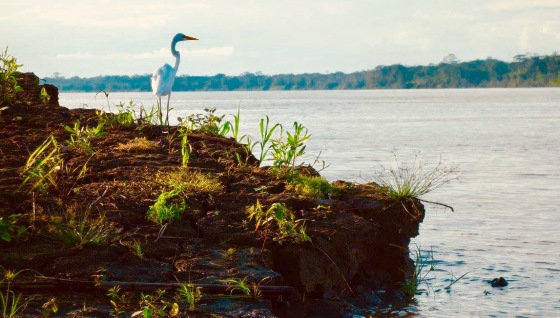 It’s all in the power of letting go. The truthful silence of a blank page to create a more meaningful future and accept, with curiosity and open mindedness, the inevitable changes that will come.

Like the jungle, we are not here to remain the same.

It’s easy to embrace change when surrounded by new experiences and people. However, in the two months since I’ve returned to Austin, I’ve remained committed to a new path. I’ve made three simple adjustments to my day that maintain my focus: a morning practice; reducing screen time; and reaching out to be more connected, even if it goes against my default mode.

My morning ritual includes a ten minute practice called the Five Tibetans, a collection of five yoga postures repeated 21 times each, followed by meditation, and then a stream of consciousness writing practice. Depending on time constraints, I can complete the routine in 30 minutes or extend it up to an hour. My morning ritual gives me an intention to hold on to throughout the day and a reference point to return to before bed.

Screen time is my monkey mind’s drug of choice. I have not been completely disconnected from the electronic frenzy for any length of time in over decade. I was surprised to find how easy it was to leave my computer and phone behind. My attention span needed several days to recover, to be able to lengthen and slow down.

In my life in Austin there’s not much wiggle room in our busy family’s schedule. However, I’ve managed to recaptured hours in my week by limiting screen time. I’m writing again and feel less distracted. I have purposely cut back on my news consumption, too. I’m finding that I’m no less informed and if anything I feel more energized to get involved in the causes I support.

I went to the Amazon thinking that I wanted to be isolated and left alone. The sweetest surprise of the trip was our group connection. We had time to hear each other’s stories and develop fast friendships. The abundant laughter and encouragement buoyed us even as we struggled at times. I have nothing against social media platforms but the rapid fire pictures and quick comments are not a replacement for spending time with people, face to face. 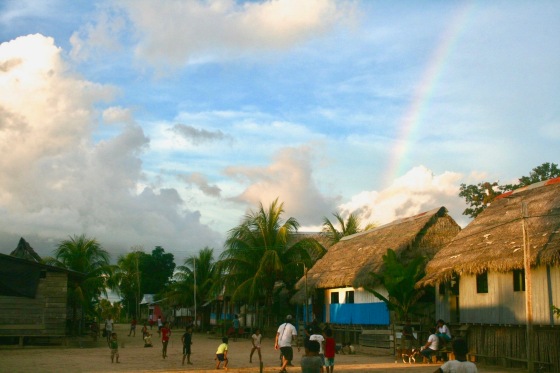 We are human beings and have evolved as communities and tribes. We are not designed to live alone in our computers and phones. I returned home with the commitment to be a more present mother, daughter, partner, and friend.

My visit to the Amazon was a turning point and the lessons I took back with me were not grand like the jungle. I do not feel like I have to make sweeping cataclysmic changes. Instead it is micro adjustments and the return to simplicity, kindness, and the warmth of human contact.

Within the collage of jungle sounds, the weaver bird makes a distinct call like an electronic plink of a stone being dropped into still water. While in the Amazon, the sound became a welcomed anchor, the recollection of which I can still feel in my chest and is a reference point for me to stay present and mindful that we are not here to stay the same.

“Each day has a story that deserves to be told, because we are made of stories. I mean, scientists say that human beings are made of atoms, but a little bird told me that we are also made of stories. We are the sum of our efforts to change who we are. Identity is no museum piece sitting stock-still in a display case, but rather the endlessly astonishing synthesis of the contradictions of everyday life.” Eduardo Galeano

Thank you Laura and Erika with OneYogaGlobal for organizing such an affirming and healing adventure. Extraordinary locations, exceptional teachers, and life-changing experiences. http://www.oneyogaglobal.com

13 thoughts on “We Are Not Here To Stay The Same”