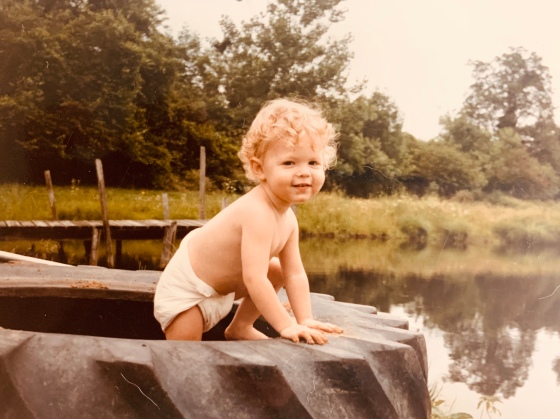 It didn’t cross my mind, not even for one millisecond, that I shouldn’t eat the exquisitely wrapped chocolates at the base of Buddha’s lotus-positioned feet. The small rectangles, packaged in a rainbow of bright colors, looked exactly like the legos I had been playing with all morning.

Having never seen a home alter before, I didn’t know that the chocolates were off limits.

The summer after my freshman year of college, I worked in New York City as a nanny for the sweetest toddler named Paul. His blonde ringlets and predictable, almost constant, cherubesque demeanor were in stark contrast to his kind but wrung-dry looking parents.

Paul was an only child, although there were grown unseen step-siblings, of an older psychiatrist and his second wife, younger of course. She carried herself wearily, without the confidence that I felt around the other young-ish mothers that I met through the service. The other mothers beamed with the good fortune of what appeared to me, a directionless college student, as having it all.

I applied for the job because of the Park Avenue address. It jumped out at me when I was reading the listings in the cumbersome black binder at the Barnard College Alumnae Babysitting Service. I envisioned a penthouse with a wing for me and my toddler charge.

Instead, it was the smallest living space I had ever seen. Adding to the cramped and restrictive situation, was the fact that Paul’s father ran his practice out of the apartment in the living room off the dark and tapestried main entrance.

My domain included a closet-sized kitchen with one window looking out a second-floor air shaft, a narrow hall where I could reach out and touch both walls at the same time, a nursery that fit just a crib, and the master bedroom where a stone carved Buddha took up half the space. The remainder of the multi-use master bedroom included a small futon, all of Paul’s toys and stroller, stacks of books, and a clothesline for cloth diapers.

The items placed around and on the Buddha were a continuation of the explosion of flotsam in the room.

Paul’s mother was decades ahead of her time with discovering threatening food allergies and fearful eating. I spent hours squished in the tiny kitchen, my back pressed into the wall as I sat in front of Paul’s high chair spooning foods I had never heard of in his mouth.

I did not speak with Paul’s dad. He smiled and nodded at me when he walked into his office as I hurried down the narrow hall. Paul’s mother asked me to stay in the playroom, which we pretended was not her bedroom, while her husband saw patients in the morning.

Instead, I would pass the patient time at the playground in Central Park. I ran after Paul and listened to the au pairs complain about their host families and speak to one another in their home languages.

It rained the morning that I carelessly ate the sweets left at Buddha’s feet. Paul and I could not make it to the park. The hours stuck in the apartment were excruciating. Paul’s joyfulness usually softened my boredom and claustrophobia, but that morning, he was cranky. As I read to him, he fell asleep.

I stood up and considered the Buddha. For a month I had shared my workspace with the statue, and surprisingly, not given it much attention.

When Paul’s mother opened the door, I was unwrapping my third rectangle of chocolate. She looked more wrung-dry than usual as her eyes went from Buddha to my hands. I kept chewing and swallowed as fast as possible.

I gave my notice and stayed for a few more weeks while looking for a waitressing job. We parted amicably. I still have the picture of Paul that his mother gave me the day I left. He is climbing on a monster truck tire next to the pond at their country house, smiling of course.

2 thoughts on “Eating the Chocolates at Buddha’s Feet”