I painted our house orange for a day – traffic cone orange – Candy Corn to be accurate.  It was a premeditated decision.  I developed the plan with Jimmy at the local hardware store and Eric the contractor.  I brushed aside their concerns that my paint choice was too bright or that maybe the Canary yellow trim I picked was too much.

Did I mention the neon lime green I chose for the sheds in the backyard?

I’m a month and a half into a summer spent primarily amongst teens and tweens – specifically an almost-fifteen-year-old-boy, soon-to-be-thirteen-year-old twin girls, and an adolescent English Bulldog.  Unlike last summer, there are no marvelous plans for adventure. I knew the facts going into the season.  As I predicted in my January blog post, Belly of the Whale, this year is about standing still, fixing what’s broken and finding North.

Juxtaposed to this backdrop are my kids and dog who shape change from child/puppy to teen/dog in unpredictable and unsynchronized cycles.  There is always a creature in crisis and several days out of each week this summer Otis has forgotten that he’s house trained.  I caught him in the middle of the night relieving himself at the top of the mountain-esque pile of clean laundry next to my bed. Apparently it was easier for him to make the climb than ask to go out.

This summer our tribe is particularly messy and we have to watch where we step.

I have found that as the kids become teenagers is when I truly see my genetic cards on the table –  face up. The good, the challenging and the parts that make me grimace.  If you’re a parent of teens you know what I’m talking about.

When they’re young you still believe in the blank slate.  When they become teenagers, you’re hit on the head by the apple falling from the tree and there are moments when the knowing identification and transference will make you nauseous. You’d like to give them warning but it’s their hand to play this time around.  It can be a difficult game to watch in the teen years.

It takes an incredible amount of my energy to hold space for three changelings and an English Bulldog with an alpha attitude.  I bike and run in the early morning as a daily inoculation against the teen invasion that I face everyday – it’s like I’m in one of those zombie movies where they just keep coming.  Our zombies have reached the age where they’ve realized that there aren’t any parenting tools that can take them down.

The All-Powerful-Parent magic trick has been revealed for what it is – two flawed middle-aged human beings with good intentions but who are running out of steam. The Zombies sense their power and I’m the starring victim in the movie.  The embarrassing mom they love and loathe in equal parts. The epic push/pull of emerging independence has begun.

In order to keep my sanity, my summer has been built around a to-do-list approach to survival.  A to-do-list is a leash for my wandering brain.  It helps me to see a path through the zombie attacks and the summer doldrums.  There are micro to-do-lists for each day and macro lists for big summer projects.

This brings me back to my orange house.  Painting the exterior of our house was number one on the Macro List.

We have lived in our current house for two years.  The previous owners painted it a bank lobby forest green with burgundy trim.  The inside was painted rain cloud grey which I remedied before we moved-in with a warm white and healthy doses of raspberry, yellow, orange, and melon green

As previously stated, it has been a couple of months of genetic payback and checking off lists.  I’ve been feeling a growing pressure to liven things up a bit.  The kids’ life stage and a little summer stagnation awakened the repressed adolescent in me who needed to make an over-the-top identity statement.  A declaration that I may be middle aged but I’m still alive.  Little did I know I was going to let it all out on the exterior of my house.  Bright orange, yellow and lime green.

I met with the painter and the contractor the night before with my color chips.  The painter smiled a happy grin and said that the house will look like a piñata. Sounded better than a bank lobby to me.  The next morning the contractor called from the hardware store and asked me one last time if was certain that I wanted orange, that particular orange.

I stayed around in the morning, just long enough for one half of one side of the house to be painted orange.  It looked good. Ha! It was going to be just fine after all.

A busy schedule had me on the go and I didn’t make it back to the house until mid-afternoon.  What I saw when I turned the corner onto our street was an orange mistake of radioactive proportions.  Our house was pulsating under a glowing orb that ricocheted off the homes on either side.  I had created an orange force field that encompassed half the street.

If it wasn’t my house, I would have considered it to be quite awe-inspiring.

The young couple next door later told me that they thought they were experiencing the apocalypse when they walked into their kitchen that afternoon.  Meanwhile on the other side of our house, the sorority girls didn’t even notice.  We tolerate their late night  karaoke parties and yappy dogs so a little orange wasn’t going to mess with our arrangement.

The rest of the neighbors tried not to make eye contact.

I was greeted by the painter who still had a big smile on his face. This time he told me that my house was Hot, Hot, Hot as he opened and closed his fists like sunbursts with each word. Between my kindergarten level Spanish and his earnest attempt with English, I frantically told him to stop painting my house orange.

Please, for the love of god, no second coat.

My heart was beating irregularly.  The kids, back from driver’s ed and gymnastics practice, were horrified.  Eli thought our house looked like a package of Skittles and then said that he wouldn’t live in an orange house. I kept circling the property trying to find the right angle that would give me hope that I didn’t make a nuclear orange blunder.

To close my eyes was the only immediate remedy.

Always one to be solution focused, I called the contractor and told him of my mistake and then loaded up Georgia, my most color-coordinated child, in the minivan and headed off to find a way out of this orange morass.

Our neighborhood hardware store has an interactive program that scans paint chips and gives a mock up of the colors on a digital model house.  We poured over color pairings that could bring our little piece of the world back into homeostasis.  We settle for the first combination that I chose before my middle-age crisis inspired orange fiasco.

Holly Glen with Purity White trim.  Feeling like colorist superheroes, we had two test quarts made up and headed back to the house.

When the news spread in our neighborhood that we were not keeping the orange, my quiet neighbor across the street came over with his iPad to show me a couple of his wife’s alternative color suggestions, all creams and beiges.   I told him that I had picked Holly Glen and was hoping that it was not too close to their color.

He didn’t care.  He just wanted the orange force field to be turned off.

Mercifully, the universe conspired to protect me from my folly by having the paint spraying hose break and a delay at the hardware store gave us a window that prevented the last three gallons of orange paint from being made.

Within 24 hours the exterior of our house flipped to the opposite side of the color wheel and all evidence of the orange was gone except for the gravel in my garden path where the paint spraying hose burst.   I did keep the neon green sheds and painted the front porch swing the same color. 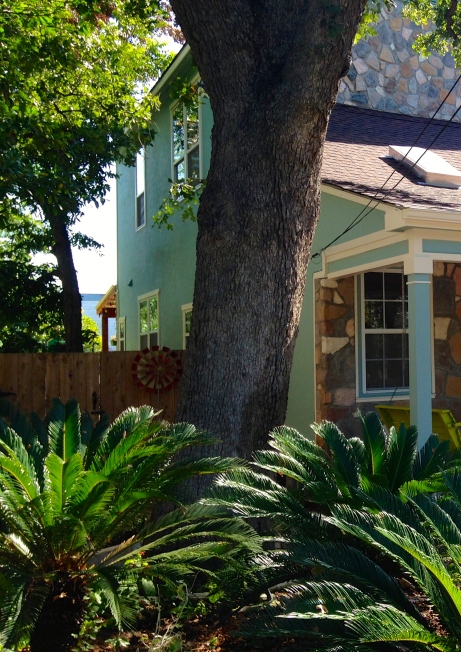 Link to Belly of the Whale:  https://ebreston.wordpress.com/?s=belly+of+the+whale&submit=Search

3 thoughts on “How I Happened to Paint My House Orange”