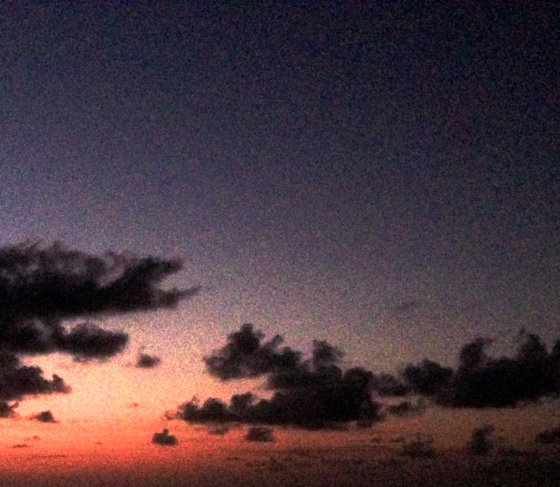 It had been overcast all day and the low hanging clouds had a sunset pinky grayness that made the spring green leaves pop with color.  It was early evening, past the golden hour that my camera loves, when the world’s edges look softer.

We just turned the corner on an ordinary walk.  On the opposite side of the street, our eight-year-old neighbor boy led a makeshift after-dinner parade down the sidewalk while playing his violin.  I have never had a conversation with him beyond hello but I hear him practice on his front stoop, always during the blurry transition into night.  It never fails to bring me back to gratitude, regardless of what has filled the prior hours.

He was followed by his sister, a couple of years younger, in a mint julep princess gown with silver piping and wings added to the back.  Next in line came the youngest, now two, but I remember her as a baby being held in her father’s arms and looking over the fence at our frothing, barking bulldog puppy – a look of puzzlement on her face.  She was wearing a matching yellow gown with smaller wings. The dress dragged behind her small frame.

Their father, a graduate student at UT, walked close behind the youngest. I often watch him with his three kids from my porch or pass him on the road as he rides to campus with the youngest on the back of his bike.  He has a tenderness that he brings equally to building a playhouse in the front yard or hanging clothes on the line in back by the chickens.

My husband and I clapped and the parade stopped.  The dad, I can’t remember his name despite several introductions, asked his son to play a piece that he recently learned. The boy paused, turned to us and began.  Matthew and I stood in the middle of our quiet dead end street and listened.

Because of the light and the slow motion unfolding of the scene there was something doleful in the sound of the notes.  Not the sadness of despair but of awakening to the exquisite beauty inherent in being human, caught within an unexpected moment, simultaneously fleeting and everlasting.

When Leo was thirteen, I took him on a trip through the Mexican State of San Luis Potosi.  We left Xilitla and drove for hours without seeing a single person.  Abruptly, the jungle ended and fields began.  Appearing like an apparition on the side of the road were two men mending a fence and a third playing an instrument that looked like a handmade full-standing harp. The harp had a thick sturdiness and flairs of bright colors that reminded me of primitive art.

They were only feet away from the road.  We slowed but it felt inappropriate to stop or question; like when reading magical realism, the moment seemed completely plausible and to stare would be rude.  The two working nodded in recognition while they shovelled but the harpist continued, his eyes watching his hands play.  If it were not for Leo’s corroboration, I would tell myself that I had dreamed the three men.

The scene captured everything that is non-sequitur about life and shouts that there’s no context to anything we experience.  We string together lives that make sense to our meaning-making minds and label events with emotion and logic.

Every so often we are privy to moments, like with the parade and the harpist on the side of road, that are so stunningly absurd in their leap from the script, that time stands still and we see the truth.

6 thoughts on “The Parade”